I was really excited to see Reckless Love play at the Electric Ballroom conveniently located slap bang next to Camden Town tube station and one of the largest venues in Camden. I’ve only been to the Electric Ballroom once before and that was to see another Finnish band, funnily enough, my beloved The Rasmus, without whom I might not be on this journey. Thank you, guys, I love you!

Thin Lizzy’z familiar The Boys Are Back In Town heralded the arrival of the four fabulous Finns with singer Olli Herman bounding on last clad in skintight leggings, a denim waistcoat and sunglasses. I mean, he really is gorgeous, complete with a golden mane of luscious wavy hair that would give Jennifer Lopez a run for her money. They kicked off with Animal Attraction, with Olli shaking his very nice booty all over the place and performing some really quite suggestive hip thrusts! Jalle Verne kept holding his bass over his head, Heikki Ahonen (aka Hessu Maxx) twirled his drum sticks, and guitarist Pepe melted faces with his tiger print guitar. It was actually pretty exciting! And then Olli whipped off his sunglasses to screams and cheers before they carried on with So Happy I Could Die which gave Olli a chance to showcase just what a powerful pair of lungs he has with some electrifying screams. 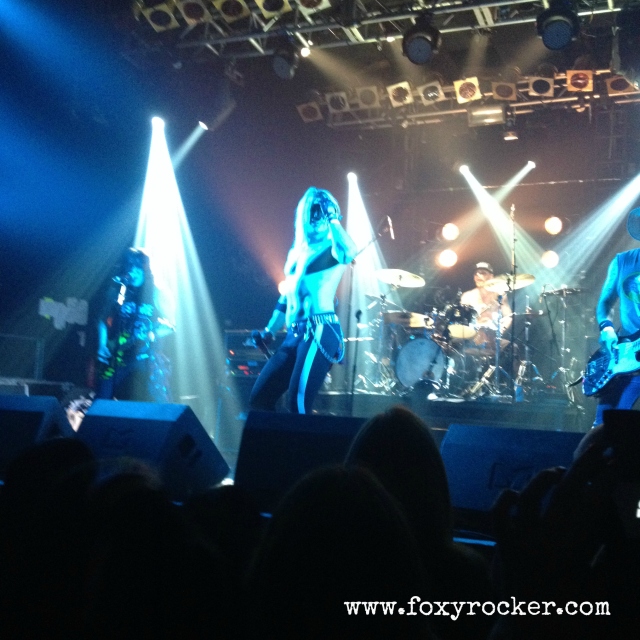 After greeting the crowd properly, Olli then said they were honoured to be playing at the Electric Ballroom, and announced that “Our career started in 2010 at The Barfly“. They played We Are The Weekend next, from their new album InVader. Amid a cacophony of cheers Olli put on a snazzy leather (faux, I hope) policeman’s cap for Monster, a track I heard frequently played on the radio on my last trip to Finland in April which you’d have to be made of stone to not want to lustily sing along to, and so that was pretty nostalgic for me! Around this point I spotted a pigeon flying up to the rafters. I really hope someone retrieved the poor creature and released it!

Olli asked the audience whether we liked the new songs and then added ‘How many of you were there when Reckless Love started in 2010′ which was received by a few cheers. Then we were transported back to older tracks, and they played Beautiful Bomb, Child of the Sun, On the Radio and Night On Fire.

And then came the moment many seemed to be waiting for with baited breath (including me, gotta admit), and Olli took off his waistcoat to delighted squeals and screams, and the band played the very last song, Hot. How apt, eh? It was all very 80’s and reminiscent of Bon Jovi, Olli even had the red leather gloves, and I had a smashing, feel good time! I know critics have said that we don’t need another band that plays old fashioned rock ‘n’ roll, but I say, the more the merrier, I bloody adore that era, and especially if they do it as well as these four fabulous Finns!