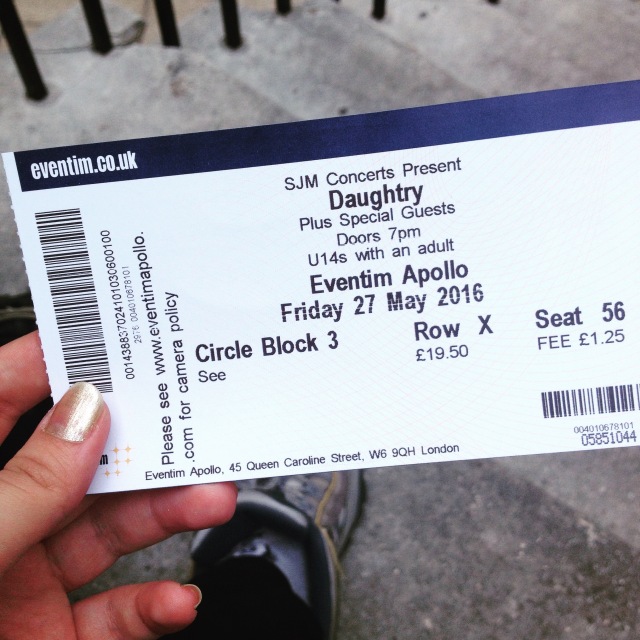 I mainly bought tickets to Daughtry’s show because my mum is a big fan, but I do enjoy his music, too. Not all TV talent show contestants continue to thrive a decade after their first appearance, but Daughtry is one of the exceptions to the rule.

After an energetic performance from supporting band Strange Bones, Chris Daughtry bounded onstage, buzzing with energy, and sporting a hoodie and jeans and kicked off with Go Down, a track off the new greatest hits CD, quickly followed by Outta My Head. Daughtry said he was reluctant to release a greatest hits CD because it felt like it was a sign of the times, and it was something that bands like the Eagles and Bon Jovi would do!

The first thought I was struck by is just how amazing Chris Daughtry sounds live, which isn’t something that can be said for everyone, and he sounded crazy impressive and powerful belting out the tunes at Hammersmith’s Apollo. He probably sounds better live than he does on record, which is why seeing musicians play live is so necessary, essential, to really experiences the music at its best.

Feels Like Tonight really got everyone going, and it was wonderful to see people singing along. I freaking loved Waiting for Superman, it’s such an uplifting track! The tone was softened with a few mellow tracks, Tennessee Line, Life Without You, and a cover of In The Air Tonight, and, despite the fact that I’m really not, and never will be, a Genesis or Phil Collins fan, it was a smashing cover and Daughtry made it wonderful!

They played What About Now, an old favourite next, and Daughtry announces that the band is working on a new album, which is set to be released either at the end of 2016 or early next year. I was happiest when they played Long Live Rock & Roll, and when they kicked off with Renegade, one of Daughtry’s heaviest, raunchiest, rockiest songs, my absolute favourite, and the one I’d been waiting for. It was absolutely mind blowing! In fact, they played most of the old favourites, Over You, Home, and not forgetting the crucially important It’s Not Over.  And as always, the joyous, uplifting evening was over far too quickly, and the band topped it all off with a beautiful cover of Purple Rain.

The only thing I can complain about is that they didn’t play Wild Heart, but the set list was 99% awesome otherwise! And despite the fact that I wasn’t feeling very well during the show, I still thoroughly enjoyed myself, and my mum did too! Daughtry is definitely, definitely worth going to see, the band puts on a fantastic, unforgettable performance, and you will definitely leave feeling damn great! ‘Til next time, Chris!