Posted on November 21, 2017 by Amanda Winchester 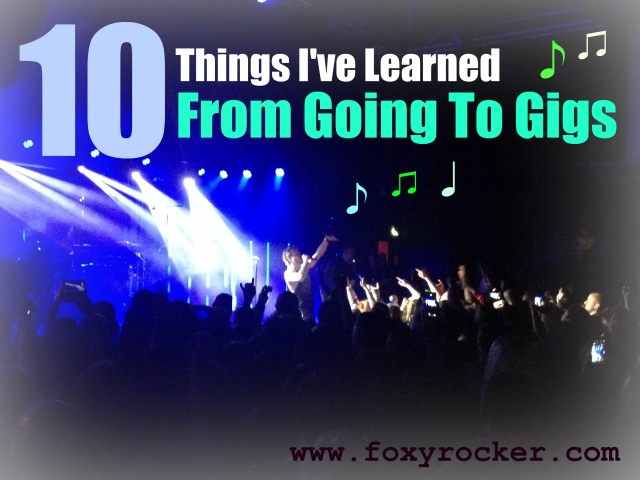 I’ve been a music fan for years and I’ve been going to gigs for almost three years now, and I’ve picked up quite a few things along the way that I’d like to share with you that will hopefully enhance your own concert experience when you go to see your favourite bands!

So here we go…

There’s no reason why you should miss out if none of your friends are into a band you want to see. Be brave and go solo, and trust me, you’ll have a great time. You can browse merch at your leisure and, chances are, you’ll probably end up talking to lots of nice people anyway. Rock fans are a lovely lot!

I used to think this was super important but it’s really not! I once got right up to the front at a Trivium concert and it was super hot and my eyes nearly popped out from being squeezed! Nah, you can have a great time from the middle, side or back without getting elbowed in the face. Sure, if you’re at the front there’s a chance you’ll nab a guitar pick or drumstick but I don’t think that’s worth suffering for.

3. You don’t have to get there super duper early to start lining up

Peeps that want to do this for the sake of getting to the front or the chance of a band member walking by, I totes respect that. But you don’t HAVE to be there earlier than an hour, really, and I like to make sure I’m in when the doors open because I like to check out the support bands. But if you don’t want to camp outside with a blanket, you don’t have to.

I can’t stress how important this is! They usually confiscate water bottles on entering a venue, but they will give you free tap water at the bar if you ask, and because music venues tend to be hotter than the average ANYWHERE, it’s good to stay hydrated. Personally, I get bad headaches when I’m dehydrated, which I avoid at all costs because I want to have the best possible time.

5. Don’t spend the whole time glued to your phone

It’s nice to have footage and photos to look back on but you’re wasting the show if you spend it all looking at it through a mobile phone screen. I like to record and take pictures, too, but I restrict it to just a few and then I put my phone away and enjoy myself. The people around you will appreciate it, too, if you’re not constantly waving your smartphone around!

There’s basic gig etiquette, of course. Pick people up if they fall is, of course, the most important. Be friendly, let people pass, maybe chat to people when you’re lining up or between band changes. The rock and metal world is basically one big family and will look after their own, and it’s fun to chat to people who love the same things.

This is something I LOVE to and always do! You can put them in a nice album to flick through and remember all the shows you’re been to, or put them on your bedroom wall, or if you’re lucky, get it signed by a band member! I just think they make lovely mementos from shows and they’re worth holding onto.

8. Eat before you go

You’re going to need plenty of energy, not just for jumping around (if you so choose!) during the show, but all the standing around before the band comes on and queueing to get i, etc. So make sure you tuck into something tasty before hand to avoid feeling faint or, worse, passing out.

9. Tie up your shoelaces

Pretty basic but people tend to lose their footwear at gigs, for all sorts of reasons, and it’s not the best of times when you have to walk home barefoot! There’s the danger of tripping on laces, too, so be super wise and keep your laces done up.

If you want to buy merch then by all means, do. You’ll have a nice souvenir and you’re supporting the musicians. But it’s not compulsory, and don’t feel bad or guilty if you don’t. Merch tends to be more expensive at shows due to the venue fee, so you can pribably get what you’re after from the band site for less. Sometimes it’s nice to treat yourself, especially if it’s a really special concert, but don’t feel pressured into it at every show.

So, there you have it… All my nuggets of wisdom are unleashed unto the world. Go forth and rock, my darlings, and don’t forget to have the most awesome time!