This was one of the more surreal gigs that I’ve been to and if you’d told me a few years ago that I would one day have this experience I would have told you to dip your face in a bucket of cold water. I never get tired of seeing the bands I love play live and Apulanta are definitely one of my favourites. Big in their native Finland, I feel like the rest of the world is really missing out on this talented punk rock trio.

Verkatehdas is a theater hall in the town of Hämeenlinna in Finland which hosts everything from classical to metal concerts. This was definitely THE politest, most punctual and well scheduled gig I have ever been to. As it’s my first gig in Finland, too, I dunno, maybe all their concerts are like this, but as someone who is used to standing around and waiting sometimes for hours for a band to come onstage, being pushed and shoved around a sweaty venue by blokes twice my height and size, it was a pleasant change! I was bang in the front row, right in the middle. Toni’s mike was mere feet away from me. My heart was pounding so hard I was convinced the whole assembly could hear it. I couldn’t believe how lucky I was to have bagged this seat!

And then, right on time, the band came onstage at 7 pm sharp. Polite clapping commenced as the band solemnly accepted the welcome with Toni coming out last to slightly more enthusiastic applause. I thought my head would explode. Toni and Sipe in the flesh, right in front of my beaming little face! They took their places on these bar stool type things and proceeded with an acoustic set. Toni would pause at the end of each song to very seriously thank the audience and to tell little stories and anecdotes. It was all very proper! I had this feeling the whole time that the whole thing couldn’t possibly be happening.

I was BEYOND thrilled to hear Pala Siitä, which works surprisingly well as an acoustic track, even though it’s one of their heavier tracks. I recognized the beginning of Valot pimeyksien reunoilla before Toni had even breathed the opening lines, it’s my favourite song off their new album and definitely on my soundtrack of this whole year!

Right before there was an interval, they played Armo. It’s my favourite of all their songs, utterly honest and haunting, and Toni sang it so beautifully it brought tears to my eyes, and it was all I could do to prevent myself from bawling my eyes out. Enough though that Toni spotted me wiping half my makeup off with tears in the front row and gave me a little smile. He said they didn’t usually play that particular song at gigs but he was going to make an exception, and I’m so glad they did because I would have been so disappointed if they had skipped it.

After the interval and a punctual return to the stage the real fun started! The stage was revamped with spooky, gas mask wearing figures, and Apulanta walked on looking absolutely smashing clad in their album cover gear and wielding the slightly sexier electric guitars. Sipe took his place at his throne-like drum setup in a sort of display case glass cage, Toni and Ville took on battle stances, and Apulanta proceeded to rock our socks off.

By this time I was absolutely desperate to get up and jump about, but get this, nobody in the audience got up until Toni said, you are allowed to stand up for this, y’know. And then, and only then, mind you, people stood up, and the whole damn hall shook like an earthquake underfoot! We jumped like insane, rabid monkeys to their last few tracks but especially, especially, Mitä kuuluu, of course, OF DAMN COURSE. It was the framing glory of the entire night, the ultimate crown jewels, and it’s a miracle the thundering, stamping energy didn’t blow the roof off the whole place! 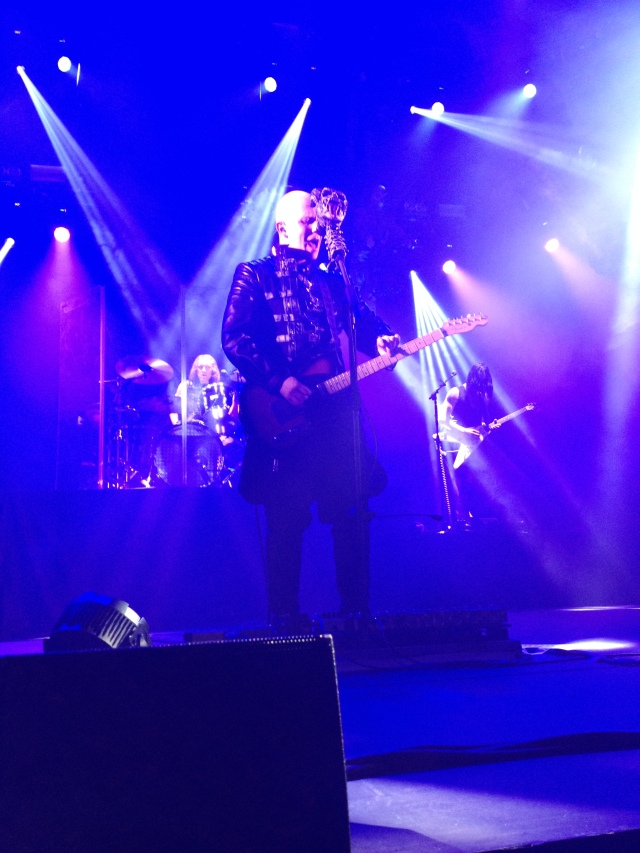 Head spinning with happiness, I made my way out to the entrance hall where there was a little desk area where it said the band would come out for photos and signing. That’s how things are done in Finland. There’s no standing about in the freezing cold to wait for an autograph or a quick selfie, this was done in an orderly fashion, as punctual as their concert, and flipping heck, I LOVE IT SO MUCH! Don’t get me wrong, I will wait for my favourite bands all night in the flipping freezing cold if I have to, and I have waited faithfully for hours on many occasion, but goddammit, this was so nice. The only discomfort I suffered was a suddenly dry throat when Sipe and Toni walked out again, and there I was clutching my album covers and reminding myself not to babble.

Every time I think I have definitely met the nicest musician I could possibly ever meet, another one comes along and proves me wrong. And Toni was so damn lovely. I mean, I must have looked a bit petrified, but he put me at ease straight away with a kind greeting and easy chatter as he signed my album covers, and he listened intently as I rabbited on about how I’d waited like 10 years to see them, how thrilled I was, and how I’d come from England to be there. To be honest, he was the one asking me questions, and then he switched to speaking to me in English and telling me about how they’d played Camden in the past. Well, that set me off again because I absolutely adore Camden, and we chatted easily for some time. Toni even remembered my name when I rejoined them for photos, and Sipe was super lovely, too, he said my Finnish was very good, and he asked me so many questions that I was starting to feel like a rockstar myself!

It was an evening literally beyond my wildest dreams. I got everything, everything I wanted and so much more, and I still can’t believe these things actually happen to me! I mean, flipping heck! Part of me is completely astounded that they do, and continue to do so, regularly, and part of me is a little bit proud of myself for being brave and making these things happen for myself and following my passions. ‘Cause life is short and ain’t nobody gonna live life for you but you!