When I bought my ticket to see an acoustic set played by Wednesday 13 at Underworld, Camden I wasn’t sure what to expect. I love Wednesday 13 and I absolutely love the Underworld, but like, how exactly do you turn raunchy Wednesday 13 tracks into acoustics? Would it be any fun? How would it work? 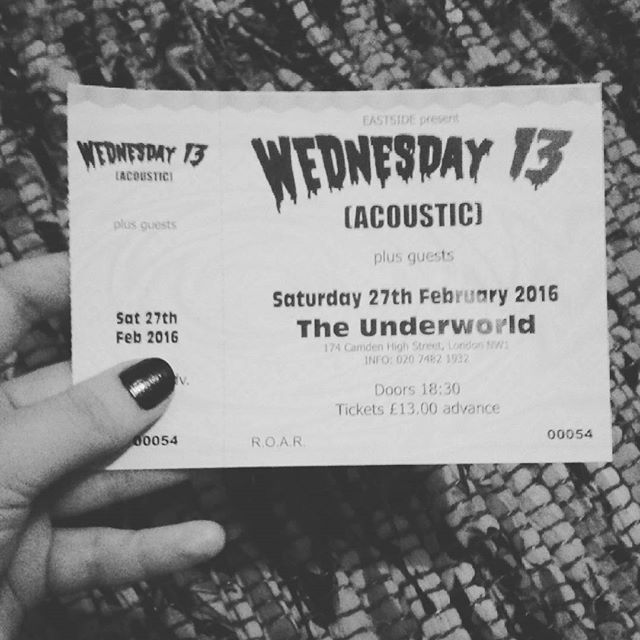 The answer is, surprisingly well. It was a lot more than just an acoustic set, as I would later find out. The premise of this evening would be an intimate, campfire vibe gathering, with Wednesday not only playing songs spanning his whole back catalogue, but also telling stories about everything from his very first band, writing songs while he worked at a supermarket and playing to his cat, to the creation of his newest albums and his car accident drink driving.

While Roman Surman, Wednesday’s bandmate as well as his guitar technician, tuned Wednesday’s guitar, Wednesday answered questions from the audience, and interacted with us all. He was funny and entertaining, even though he confessed to be super nervous doing an acoustic set where he didn’t have the usual instruments to “hide behind”!

I was so lucky to meet both Wednesday 13 himself and Roman after the show! Roman Surman is hands down THE nicest musician I have ever met. Super friendly, outgoing, and kind, he went out of his way to accommodate everyone, pose for photos, and sign everything. Wednesday was a little more on the timid side, preferring to lurk in the shadows, but he was just as kind and sweet, and he happily signed the stack of my album covers that I brought along!

In all a thoroughly laid back but very enjoyable night. I would definitely go to another Wednesday 13 acoustic session, but right now I’m looking forward to the Halloween gig this coming October at the Garage in London. It’s going to be a scream!