Posted on January 16, 2016 by Amanda Winchester 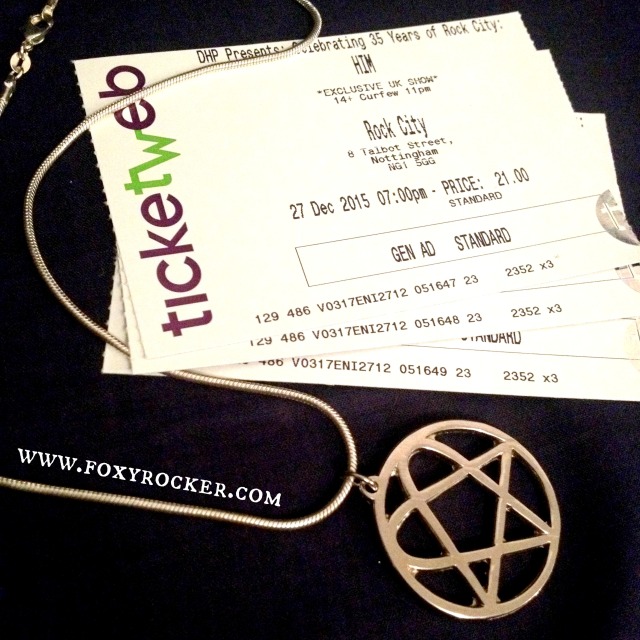 A two hour trip to Nottingham is not a journey I would necessarily embark on for just any old band, but I made an exception for His Infernal Majesty and the sexiest man in metal. This was a sold out, one off UK show, and I wouldn’t have missed it for the world. It was also a celebration of Rock City’s 35th birthday, and long may it rock, and it filled in that pesky gap between Christmas and New Year beautifully.

I am pretty convinced that Ville Valo is a vampire. Just like Johnny Depp, he doesn’t seem to age, and he’s just as gorgeous as he was when I first got into HIM 11 years ago.

The setlist was swoonworthy and jammed with pretty much all of HIM’s best tracks, kicking off the show energetically with one of their most well-known tracks, Buried Alive By Love, which was pretty apt, really, considering the audience was largely made up of adoring Ville fans!

I was absolutely over the moon when they played one of my favourite tracks Join Me In Death. What am I on about? I was thrilled to hear all of their tracks live, and there’s honestly one track on the set list that I don’t love with all my heart. There’s something so special about hearing tracks you’ve listened to on CD for years played right in front of you, not many things beat that feeling. But Join Me is my particular favourite, and it still sends chills down my spine.

It was a crazy, emotional show, the band was mind-blowing and the guys clearly put every ounce of their energy into rocking our socks off. Only Ville remained unflappable, a picture of charisma, as he easily chatted to the audience with cheeky quips and banter. He actually stopped the show mid-song for a moment to put a stop to a fight, saying “let’s save our noses for cocaine and our fists for the bedroom.” (!) which made everyone chuckle. And then he just carried on, like a true professional, as though nothing had happened, and hats off to him, for the show must indeed go on.

Before the end, Ville basically told everyone that they had time to go off for a smoke if they wanted to, and as they are “Viking Finns”,that was their way of saying they’d be back for an encore!

And so the show came to an end, far too quickly, and they ended it with an awesome cover of Billy Idol’s Rebel Yell.

Another of Finland’s finest that I tick off my happy list, and another 10 years worth of therapy bagged in just one night. I even got a really nice t-shirt after the show, and some cool videos filmed with my phone, a couple of which I uploaded onto Instagram. Flipping heck, if I keep on at this rate I’m going to be the happiest bunny in the world!

Until next time, Ville and the boys!